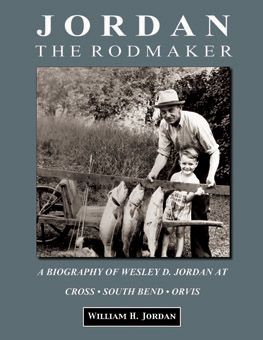 Description: Book available at Whitefish Press. Jordan the Rodmaker chronicles the life of Wesley D. Jordan from the age of five, when the ponds, streams and waters of Lynn, Massachusetts called him to the sport of fishing. Foremost a fisherman, the art of rodmaking fell into place when by happenstance the opportunity arose in 1919 with the startup of the Cross Rod Company. Owner and boss W.R. Forsyth engaged him to learn the craft of rodmaking, and he soon found himself crafting bamboo fly rods that were as good as almost any sold. Thus began a lifelong romance with bamboo and his start in life as a self-taught rodmaker.

His career derailed by the death of Forsyth in 1925, the Forsyth heirs sold the company and its machinery to the South Bend Bait Company. As a condition of the sale, South Bend purchased the services of Jordan along with his patent pending reel seat. Wes journeyed to Indiana and a six-month agreement of employment became a stay of almost 13 years. As rod factory superintendent, the company produced as many as 5000 rods a week during the heart of the Great Depression.

In 1938, a dispirited Jordan left South Bend, but he soon received a call in 1939 to join the legendary C.F. Orvis Co. in Manchester, Vermont as their superintendent-rodmaker. Although the firm had fallen on hard times, through dedication to excellence and his patented waterproof impregnation of bamboo, the company survived and prospered through the difficult periods of war, bamboo shortages and the challenge of fiberglass rods. Over his 33 years Orvis grew from a company in receivership with two employees to one in a leading position of prominence in the industry.

After he left Orvis in 1971, he gave freely of his time to teach youngsters the art and joy of fishing. He hunted the mountains of Vermont and, until the very day of his demise in 1975, Wes fished the lakes and streams that were in his blood from the day he caught his first brook trout.

This is the story of Wesley D. Jordan the Rodmaker.

Comments on this Image: (Be first to comment.) You must be registered user and logged in to comment.
Login or Register and you will be returned to this image page.